Recipe for incredibly delicious vegan Greek moussaka without frying! Packed with flavor, nutritious and rich in fiber. With lots of vegetables, and almond milk béchamel with olive oil and wholewheat flour.

This post contains affiliate links. If you make a purchase, we get a percentage, at no extra cost to you. As an Amazon Associate, allaboutvegans.com earns from qualifying purchases.

Moussaka has become a trademark of Greek cuisine. It's no surprise that it's almost never missing from restaurants in tourist areas.

Its origin is not clear as there are reports of its origin from Persia, the Middle East, Turkey, and even further back, from the Ottoman Empire. Traditionally, it is found in the cuisine of the Middle East, the Balkans and other European countries. Judging by the ingredients, we can probably conclude that in its current form, influences from France (béchamel), India or China (eggplants), and South America (potatoes) have contributed. The path it followed until its current form is certainly long as there are many variations of it, as well as relatively recent reports of traditional moussaka recipes without béchamel.

Whatever its origin, it is a crowd-pleasing food that rightly has a distinguished place in Greek cuisine.

While it is one of the most popular foods in Greece, many avoid cooking it because of its complexity, the time it takes, but also because it is a "very heavy" food. In this vegan version of ours, we try to make it, not only delicious and with the authentic traditional taste, but also nutritious, healthy and to simplify its preparation as much as possible. But if you want, you can fry the potatoes and eggplants, following our recipe for the rest of the instructions.

Our vegan moussaka (compared to non-vegan):

So it may seem like a complicated food, but the process is simple and the result is more than rewarding! In just four stages we will have a delicious and vegan moussaka. Bake the potatoes and the eggplants, cook the soya mince, prepare the béchamel and the topping and we are ready!

Our soya mince takes some time, as we have to chop a few vegetables, but that way it will become super tasty and nutritious. For the béchamel, we recommend almond milk, which can be replaced with soy milk, which will make the béchamel fluffier.

So vegan Greek moussaka! Give it a try! 🙂

Ingredients for potatoes and eggplants

Prepare and bake the vegan moussaka

In order to save time:

Preheat the oven when starting the béchamel. So it will be hot when we layer the béchamel and put our vegan moussaka to cook without waiting.

He is a columnist, illustrator, photographer and graphic designer and All About Vegans' web design, web development and post production department, all by himself. Finally, he's a fantastic vegan cook! That is, this is how he imagines himself. He writes recipes and cooks great (enough said) and in his free time he eats. Luckily he doesn't have much free time, so he always stays in shape. 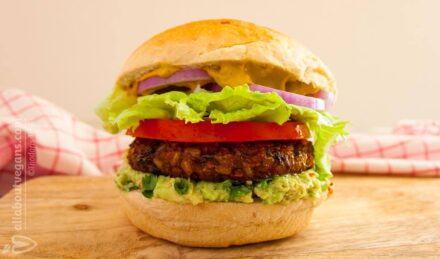 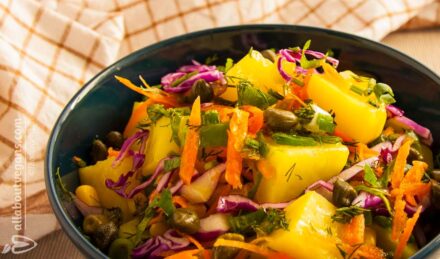 We decided to create allaboutvegans.com with the main goal of informing and raising awareness about the exploitation of animals, as well as for the interaction of those interested in the vegan way of life.
At the same time, we will be happy to help those who wish to present any relevant activity of theirs.
Read more here.

As an Amazon Associate, allaboutvegans.com earns from qualifying purchases.

We are sorry, right click is disabled.
Welcome to All About Vegans!

In order to offer you all the services available on allaboutvegans.com, such as participation in the forum, commenting and rating, you must agree with what is stated on the Terms of Use and Privacy Policy.